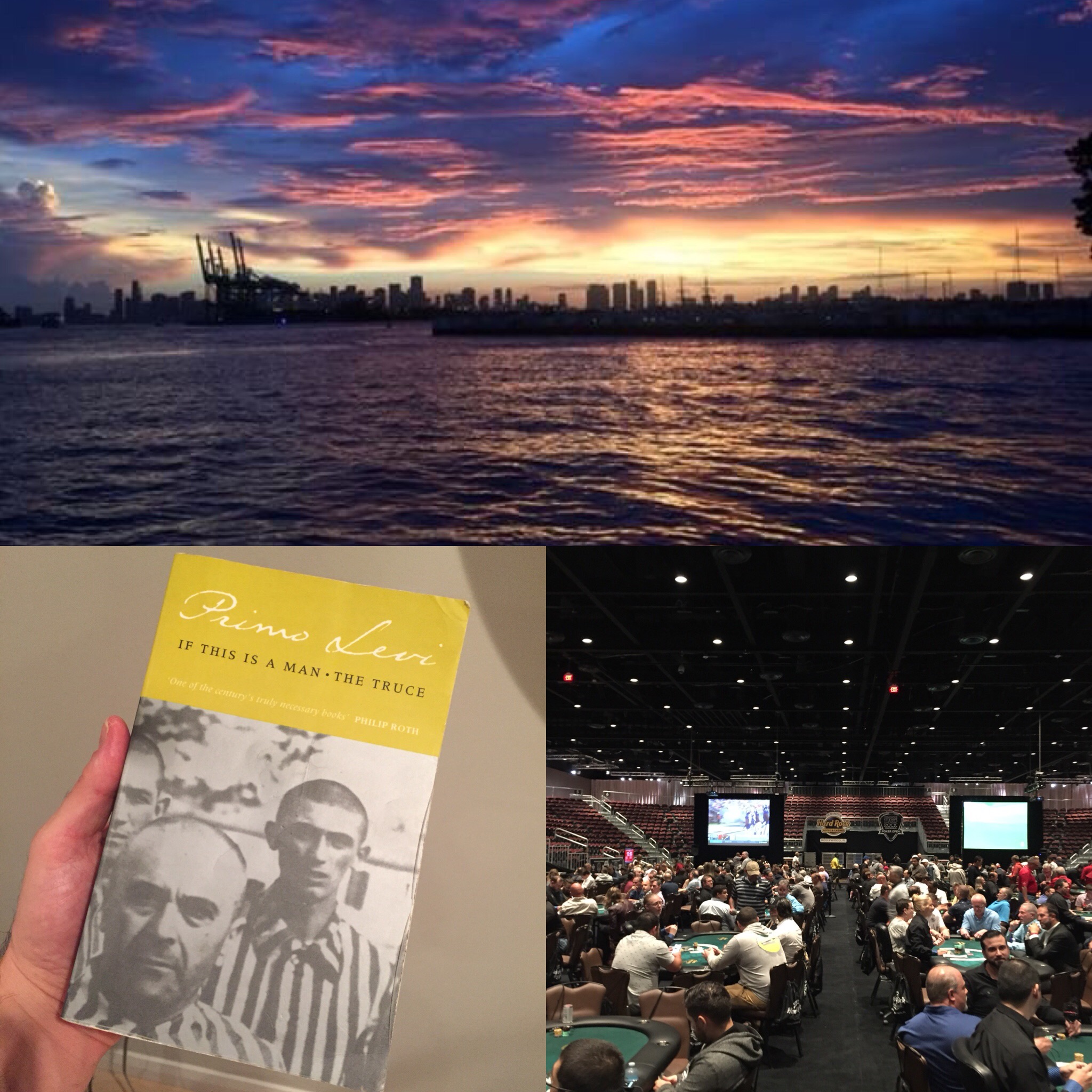 I’m transported back into time, I’m alive during the Civil War (Ken Burns documentary on netflix).  Abe was inaugurated on March 4th, 1861.  The war breaks out April 12th.  The war ended on April 9th, 1865.  He was killed on April 15th, 1865, Good Friday.  This man and his presidency was the nexus point of a people’s fate, of America’s fate.  Almost mystical his story is, if it weren’t real.

Let’s get down to brass tacks here, the juicy gossip.  I met a girl in Rome last year, she lives in Paris.  I saw her again when I was in Paris.  She’s wonderful.  I connect deeply with her.  I enjoy her company.  I’m attracted to her.  But I have a sickness, a fear; the fear of commitment.

Reading another book; a beautiful book.  A necessary book.  If This is A Man and The Truce by Primo Levi, an Italian Jewish man who spent one year in a concentration camp in Poland during World War ll.  One of the most profound and well written books I ever read.

In Primo’s book, he met two refugee Jewish sisters from Russia, without parents, 15 and 17 years old.  They had been exiled themselves for thousands of miles to avoid German oppression.  Primo described them as, “Two girls who had learned fundamental things; how to travel across continents, how to live like the fowls in the air, who labor not, neither do they spin, and who take no thought for the morrow.”

More on Primo Levi’s description of these two young girls:  “The continued by any means they happened to find, for they had no money, only an unlimited faith in the future, and in their neighbor, and a natural virgin love of life.

Gap Insanity:  When you want to get from point A to point B, but you’re in the “gap” and going insane about it.  I battle gap insanity constantly.  I find when I give myself a small, daily dose of exercise, meditation, brief moments of gratitude, writing and/or reflection through conversations with friends I keep gap insanity at bay.  When I don’t do these things gap insanity pervades my life.

Have you ever thought about taking a pay cut for a passion raise?

Everything is cycle.  Birth and death, growth and decay, inhale-exhale, blood circulation, sleep, economic cycles, world power cycles.  The change of seasons, earth’s orbit, expansion and the return.  The Manifest and the Un-manifest, the life of forms and the life on non-form; the void.  Thinking about this I ask myself am I conscious of the cycles in my life?

“It’s smart to be the dumbest person in the room.  As long as you continually grow into smarter rooms.” – Neil Strauss

“The purpose of sharing your idea is to further understand it.” – Rick Rubin

From Primo Levi’s book:  He met an elderly lady who owned a grocery store in Germany.  She and her husband didn’t like Hitler.  Unfortunately, they were too incautious with their opinion and the Gestapo took her husband away in 1935.  She never heard from him again.  Then in 1938 when Hitler gave his infamous speech declaring war, she wrote him.  She advised Hitler not to wage war because too many people would be killed and Germany wouldn’t win a war against the entire world.

Story continued….  This woman in her 70’s sent the letter with her full name and address.  Five days later she was detained by German soldiers.  They raided her grocery store and shut it down.  They threatened to hang her, then decided against it, thinking she was just a senile, old woman.  But they did exil her from Berlin and revoked her trade license.  She moved to Poland, open a grocery store there, and lived to tell Levi the tale seven years later in 1945.  You can’t make this stuff up.

I’ve been playing poker 2-3 nights per week as an experiment the last month.  It’s an addiction, and has all the symptoms of addiction.  Excitement, euphoria, uppers, the itching and wanting for more, then of of course, inevitably, the crash.  The poker hangover that comes from lack of sleep, not taking care of your body and not nourishing your mind.  The highs and lows, the ups the downs are just as real as any addiction.

The funny thing about the poker (or any addiction), is that it’s not only the crash, e.g. the hangover or losing money.  It’s also riding the high.  When you win in gambling, it’s a high energy positive gain you feel, but it’s just sucking you in.  Even when you win, you still are forming the bad habits that come with long poker sessions:  Lack of sleep, eating unhealthy, not moving, drinking some alcohol while playing.  Not to mention, the opportunity cost of not doing something healthier, more productive or better for yourself.  But damn, it’s fun as hell.

Real Artists Don’t Starve – The 12 Differences Between Starving Artists vs Thriving Artists
May 20, 2018