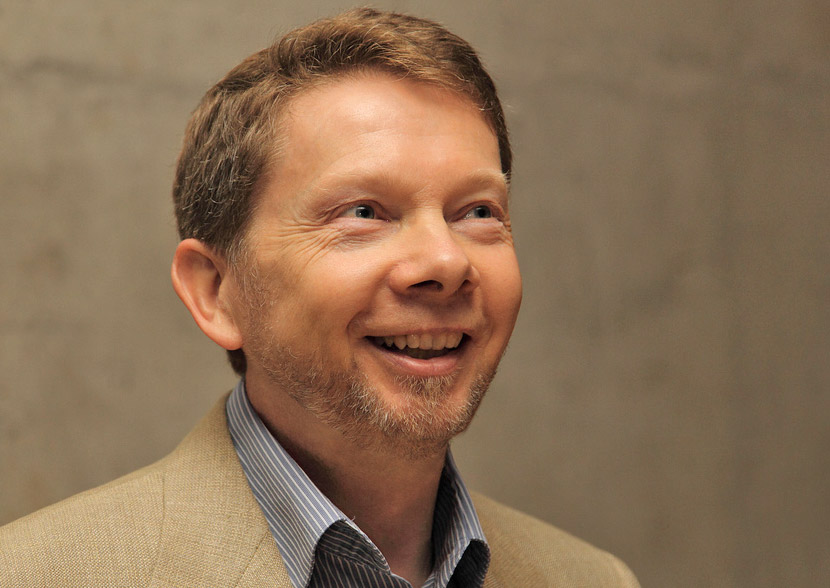 I write about Eckart Tolle quite a bit. Read his books. He’s one of my mentors. He’s made a huge impact in my life.

In his book, A New Earth: Awaken To Your Life’s Purpose, he shares 3 powerful stories.

Within these 3 stories, Eckhart conveys 3 aspects of his definition of true freedom and enlightened living. I try to live by these 3 aspects of life. I’ll be the first to tell you, it’s a struggle at times, to say the least.

I share these stories with you. Hopefully it will inspire you buy his book, and/or help you in some areas of your life.

The first story: “The Maybe Man”

A man wins a beautiful new car in a lottery drawing. His family and friends are excited for him, and tell him how wonderful this is, and how lucky he was.

The man’s response to his family and friends is: “maybe.”

A week later, he is driving around in his new car, and unexpectedly gets hit by a big truck that ran through a red light. He suffers severe injuries, and is hospitalized. His family and friends come to the hospital to console him. They tell him how unfortunate and unlucky the accident was.

A week later, while the man is still in the hospital, an incredible storm and landslides occurred in the middle of the night. The man’s house was completely destroyed from a landslide.

He would have surely died if he were in his house sleeping at the time. When his family and friends came back to the hospital, they told him how lucky and fortunate he was to be in the hospital, and not in his home that night.

The man’s answer of “maybe,” exhibits an incredible state of non-judgment for all external events that happened to him. These events he could not control, or change. He did not try to judge them. He did not put a label on them, or create a mental story on top of the actual event. Whether the events were good or bad, he aligned himself with these events; he accepted and surrendered to them, without judgment.

A Zen Master living in a small village was very serene and peaceful. He was respected, and sought after for his wisdom. He was a simple man.

One day, a young girl, a few houses away became pregnant. Her parents were very strict about her having children at such a young age. They demanded that the young girl disclose who the father was.

The young girl told her parents the Zen Master was the father of the baby. The parents were outraged. The girl’s parents scolded the Zen Master, and said the baby was his responsibility.

The Zen Master’s response was simply, “Is that so?”

They gave the newborn baby to him, and said, “Here, you take care of this baby now.”

He accepted, and took tender, and attentive care of the baby. He didn’t complain. He didn’t argue. He didn’t fight these unexpected circumstances.

He remained calm and peaceful.

Word spread around town, and The Zen Master reputation was tarnished. No one looked to him for wisdom anymore. People insulted him. His respect and dignity was lost.

He remained calm and peaceful.

A year later, the young girl admitted to her parents that the baby’s father was not the Zen Master. The father of the 1 year-old baby was indeed, the young man at the butcher shop.

His responded simply, “Is that so?”

They apologized, and asked to have the baby back. He willingly handed the baby back to the mother, and her parents.

The Zen Master exemplifies inner non-resistance and non-reaction to the events that occurred in his life. The Zen Master was at one with what happened, regardless of the unfortunate external situation.

He lost his dignity on the external level through other people’s eyes, but he internally he remained the same; peaceful and serene. He did not resist the events in protest. He did not react or fight back against the girl and her parents. He realized that would have been futile.

He did not resist anything internally. He cared for the baby whole-heartedly. He aligned himself with the present moment, and the events that took place.

The 3rd Story: The King And The Wise Man – “This Too Will Pass”

Long ago, there lived a King, who was constantly torn between happiness and despair. The smallest thing would get him very upset and cause a violent reaction. His content state of being would change rapidly to depression and anger.

The King finally decided it was time to get help. He sent for a wise man that lived in his kingdom. The wise man was said to be enlightened.

When the wise man arrived, the King said to him, “I want to be like you. Is there some advice you can give me to bring wisdom, serenity, and balance in my life? I will pay any price you ask.”

The wise man responded, “I think I can help you, but the price is so great that your entire kingdom will not be sufficient payment for it. Therefore it will be a gift to you, if you will honor.”

The King gave his assurances and the wise man left. The wise man returned a few weeks later. He handed the King a small box. The King opened the box and found a simple gold ring inside.

The ring had an inscription on it: “This too will pass.”

“What is the meaning of this?” asked the King.

The wise man said, “Wear this ring always. Whatever happens, before you call it good or bad, touch this ring, and read the inscription. That way, you will always be at peace.”

This too will pass.

Knowing the bad things that occur in life will fall away, will be helpful to get through them.

Knowing the good things that occur in life will not last, is also important. It keeps us humble, and detached.

Eckhart clearly states in his book: “Being detached doesn’t mean you cannot enjoy the good that life has to offer. In fact, you will enjoy life more. You can honor and enjoy the pleasures and senses of the World, while they last, without fear of loss, or anxiety about the future.”

Eckhart added, “It’s also much deeper; it’s a reality check on the impermanence of physical things and forms in life; the fleetingness and transience of all events and situations.”

Thank you Eckhart for sharing these stories, and thank you for writing your books.

You can buy Eckhart’s Book here: