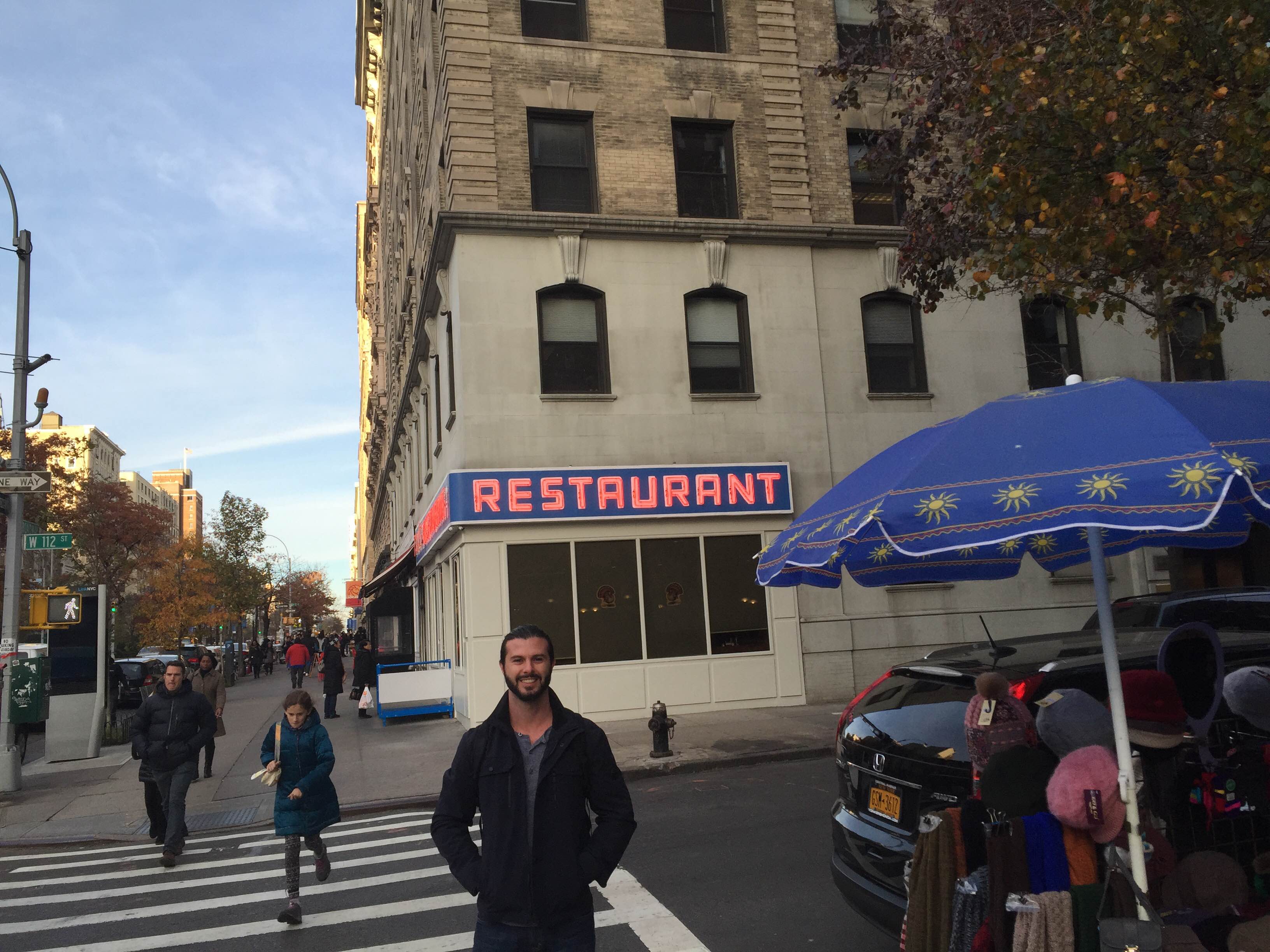 Seinfeld.  The show saved me.  It saved my life.

George Costanza is in dismay about his life.  He’s regretted every decision he’s ever made.  He has an epiphany and decides to do the opposite in all aspects of his life.  Through this inspiration, he attempts to engage a random girl at the restaurant, and tell her the truth (typically he lies in this situation).

I’ve enjoyed using this same line from the show:  “Hi, I’m Joe.  I’m unemployed and I live with my Mother.”  I loved to see the reaction from people and it’s a good laugh.  Then I elaborate.

I left my job in Oct 2015 and began backpacking around the world.  Over the summer, I came back home and lived with my Mom in Jersey.  Then I decided to move to New York for 30 days (which turned into 2 months).

I had to see Tom’s Restaurant in the Upper West side.  Many scenes from the show were filmed here, including George’s “opposite moment” of triumph.

Sitting at the counter, I reflected how this TV show saved my life.

When I was 23 years old I left a great real estate job.  A job which put me on their own TV show called “Flip This House.”  I was rising within the company.  I also bought 3 investments houses by age 23.

I decided I was bold and smart enough to set off on my own.  I was a little too cocky for my own good.

I moved to South Florida to start my own Real Estate Company.  Real Estate Solved LLC was launched in August of 2008.  Launched is the wrong word. Tanked would be more appropriate.

Real Estate Solved didn’t solve anything.  I only created problems.  My business failed, and failed miserably.  In 1 year on my own, I closed only one deal with a partner and $3,000 in profit.

South Florida was the epicenter of the Real Estate Crisis.  House values were dropping by hundreds of thousands.  The economy was crumbling.

My first day moving to Florida, I was pulled over by a police officer.  He saw all the boxes in my car, and I told him I just moved here.  He asked what I was doing for work.  I told him, white eyed and bushy tailed, “I’m going to invest in real estate.”

The police officer looked at my 23 year old self with shock and then pity.  He said, “You moved to South Florida, with this economic crisis, in this housing market, and plan to invest in real estate?”  He had mercy on me.  He didn’t issue the traffic ticket.

But in truth, the market was not the reason I failed.  It was me.  I was 100% responsible.

I cared more about my social life, partying on the weekends (which meant Thursday through Sunday), and chasing girls around South Florida.

My bank account was dwindling.  My credit card debt was rising.  I took a bar back job at a sports bar in Boca Raton.  I ran food for the waitresses.  I carried kegs and cases of beer for the bartenders.  I cleaned up the sloppy mess drunks left behind on Friday and Saturday nights.

You become your environment.

This bar environment lead to more drinking and partying.  I would hang out late after the bar closed with the staff and have drinks.  I would go to after parties.  I would meet regulars who invited me out on nights I wasn’t working.

I was drinking a lot.  I was smoking cigarettes when I drank.  I would feel like shit in the mornings.  I didn’t put any effort into real estate.  I had no energy.  I had no motivation.  I was sucked into the nightlife.  My business didn’t have a chance.

To make things worse the bar I worked at closed down unexpectedly.  Management didn’t tell any of the employees.  I went to work one afternoon and their were foreclosure notices on doors.  In hindsight, this was a blessing.  It got me out of the bar business.

My bank account decreased to a few hundred dollars.  My credit cards were maxed out.  I realized I couldn’t survive like this.  I was down and out.  I felt empty.  I felt ashamed.  I was ashamed that my business was failing.  Ashamed that I wouldn’t be able to impress people through a successful business venture.

At the time, that’s what I believed.

I remember nights alone in my apartment.  I would feel sorry for myself, maybe have a couple of beers, and watch TV.

I watched only one thing on TV.  Seinfeld reruns.  From 11pm-midnight weekdays on local cable.  This was the only therapy I knew at that moment in my life.

I saw George Costanza self deprecate and joke about his misfortunes.  I saw Elaine and Jerry vent about their relationships problems, and make light of them.  I saw Kramer eat all of Jerry’s food, and Jerry be ok with it.  I saw the characters discuss their jobs with interest, but also not take their jobs too seriously.

I saw a group of friends laugh together.  Sometimes laughing so hard they couldn’t act.

This show about nothing, gave me something.

Seinfeld also reminded me of friendship.  One thing I did have was good friends.  Friends in different parts of the world who cared about me.  I’m forever grateful.

A few years ago, I heard an interview with Carol Leifer, a writer for Seinfeld.  She talked about an experience when she didn’t get chosen for a writing gig she wanted very badly.

She was frustrated.  She felt empty.  She was down and out.  Like I was.  She then received one of the best pieces of advice she’s ever gotten.  It was from Jerry Seinfeld.  He told her, “Carol, it’s never one thing.”

But it’s NEVER ONE THING.  Life is many things.  Life is too precious to let just one thing take control.